Becoming a Translator: My Story

Fresh-faced, bushy-tailed translators ready to blaze their translation trail often ask experienced translators how they did it. Their accounts vary wildly (as seen in the Translation Journal’s Translator Profiles).

I was sixteen and studying abroad in the Netherlands with AFS Intercultural Programs when I first considered translation as a career. For my own entertainment, I tried back-translating an interview from Dutch (well, Flemish) to English with my favorite British god, Morrissey, from an interview that had appeared in a Belgian magazine. I even went so far as to send my version (by real mail; it was 1991) to the author of the article to see how I’d done at guessing Morrissey’s original words. The author responded saying I’d done a great job, though Morrissey had compared himself to an “old, beaten shoe” not a “worn-out shoe.”  I remember my host mother saying I should become a translator and my agreeing.

Years on, I’d abandoned Dutch for Italian and was studying in Florence. I remember the pleasure and absorption of the intellectual challenge of translation exercises and again thought it could be for me. After having spent more time in Italy, I was living in New York, had a lot of downtime at work and the Internet in the early years of its proliferation. I started emailing small hotels in Italy and offering my translation services for a pittance (e.g., $20 to correct (re-translate) a couple web site pages). As I gained skills, resources, contacts, and confidence, I started working for agencies, then publishing houses and other direct clients.

My story is unusual among translators in that it was an intentionally chosen path and my first career, whereas many translators stumbled onto the path and then realized it was for them.

Contact with more experienced colleagues through groups like Yahoo IT-EN was essential for my learning process. For instance, my Pesky Words list originated when I was stewing on a new way to translate “punto di riferimento,” and I realized that my more experienced colleagues would have translated it thousands of times. The support of serious translators was also vital for learning the craft and understanding the many levels of the marketplace.

Early in my career, I went to an American Translators Association conference where I sat for a proctored, hand-written exam to be accredited to translate from Italian to English.  I also took a course at NYU in Italian-to-English translation, which was not at all useful.

I tell aspiring translators that their first priority should be to gain practice because translation is a skill, not just a knowledge set that can be acquired passively. Early on, this experience could be gained by volunteering (such as with Translators without Borders or contacting NGOs in your language combination, translating articles on Wikipedia in your areas of interest, translating at the Standard level for Gengo (which pays $0.03 a word and requires passing a test), or volunteering to help an experienced translator in exchange for revising your translations.

Experience, research and colleagues will teach you what you like doing, what you hate, what you need to learn, what tools will help you, and how to keep on growing.

← Glimmer of hope for IT>EN quality?
Short and Sweet →

1 Comments on “Becoming a Translator: My Story”

This site uses Akismet to reduce spam. Learn how your comment data is processed.

Write miriamhurley@mac.com with the text to be translated from Italian to English and project details, and I will respond quickly with a cost and delivery estimate. 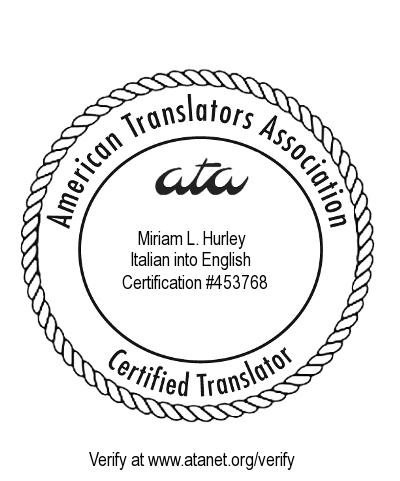